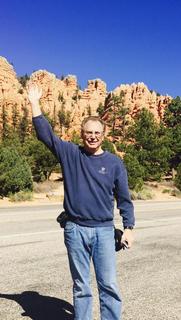 Brent G. Barker has published over 100 articles in the fields of energy and energy research, and has recently completed manuscripts of two novels: one a work of historical fiction at the intersection of slavery and the 1849 California Gold Rush; the second a science fiction/fantasy about a new energy system for bio-climate clearing.  He is now seeking representation.

He was interviewed on the History Channel for an episode entitled, Ten Things You Don't Know about the Californian Gold Rush

Brent has enjoyed a career combining his passions for research and analysis with the joys of imagination and writing. He has worked for several research institutions in complementary capacities as analyst, economist, futurist, writer, editor, and professional communications manager.

He is a graduate of Johns Hopkins University, the University of Pittsburgh, and the Defense Language Institute in Monterey California.

His first real job was as a mathematician at NASA's Goddard Space Flight Center while earning an undergraduate degree in Engineering Mechanics from Johns Hopkins. Following graduate studies and a stint in the military, Barker went to work as an Industrial Economist and Staff Author at the Stanford Research Institute (SRI, International) in Menlo Park, CA, where he researched and wrote about the future of emerging industries and technologies, ranging from powder metallurgy and noise pollution control to recycling and new energy.

Brent spent over 25 years in communications at the Electric Power Research Institute. First as the editor of their international award-winning magazine. Then as manager of corporate and executive communications, including press relations. Finally, as Executive Director of Communications, he was one of the principal integrators and writers of an Institute-wide report entitled, the Electricity Technology Roadmap to the Future. His work at EPRI informed his second novel.

Nature has been in the R&D business for over 3,8 billion years.

The Social Cost of Carbon